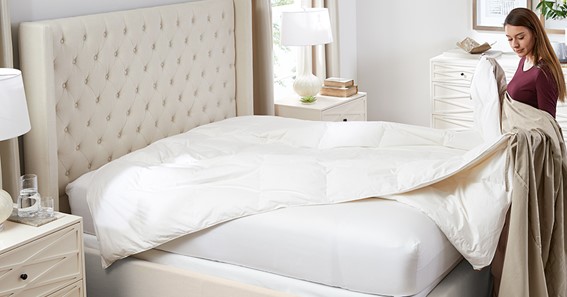 What Is A Duvet Cover?

A Duvet Cover is a protective cover that is used to protect the duvet, in short, a duvet cover is similar to a pillowcase. Duvet covers fit perfectly around the duvet and close with buttons, snaps, or zippers. These covers can be purchased with or without a duvet filler. Also, these covers are available in a variety of materials. Isn’t that amazing!

For instance, duvet covers in stripes, floral, cartoon, or sports characters are best suitable for children’s bedrooms. While duvet covers in solid or subdued patterns are perfect for adult bedrooms. You can also go for tropical or printed duvet covers for a little feminine touch!

What Is A Duvet Cover Made Of?

Duvet Covers are made of various materials and are usually lighter and thinner than duvets due to which they are easily washable. And most of them are even made from natural materials. Here, I have listed down a few fabric options for duvet covers that you must consider before finalizing one.

One of the most common fabrics used for making duvet covers is cotton. This is because it is soft, breathable, and light in weight. This type of duvet cover will keep you warm in winters and cool during summers. Even you can find a variety of cotton to choose from. Such as organic, Pima, Supima, and Egyptian cotton. Thus, a cotton duvet cover is the best option as it is an easy to clean fabric.

The duvet covers made from flannel fabric are soft and very durable in nature. Most of them are easy to clean and machine washable. There is only one drawback of this fabric that might be too warm during summers. In such a case, you have to keep some additional duvet covers to switch them according to the seasons.

Silk duvet covers are very breathable and light in weight when compared to cotton and flannel duvet covers. These covers regulate body temperature more effectively than other synthetic materials. Also, this type of cool and smooth fabric can easily last for a year. You can easily machine wash silk duvet covers by following all the manufacturer’s care instructions. But the only minus point of these duvet covers is that they have a higher price range.

If you are looking for a budget-friendly duvet cover, then you can go for linen duvet covers. This duvet cover is very soft and durable in nature. It also offers optimal comfort and longevity.

Blend duvet cover is a cotton-polyester cover made up of natural synthetic fibers. These types of covers are very easy to care for and wash.

Velvet duvet covers are made up of polyester blends. They are best suitable for the winter season.

After understanding what is a duvet set for a bed, let’s find out their different uses. Below, I have listed down some main uses of duvet covers.

Step By Step Guide For How To Use A Duvet Cover

Almost 70% of people face difficulty in putting on the duvet cover. This is why I am sharing one of the simplest and traditional ways to put on a duvet cover all by yourself.

You have to follow these steps for putting on a duvet cover effortlessly.

Cleaning And Maintenance Of Duvet Covers

By keeping duvet covers regularly clean will help you to maintain them for several years. First, we will see how to clean them and then move towards their maintenance.

Over here, I have explained how you can clean the cover.

You can do spot cleaning to clean any stains or marks by simply spot cleaning it. For this method, you can spray stain remover directly on the stain and dab it out with a cloth or sponge.

You must wash duvet covers once a month. Now, choose the detergent of your choice and wash the cover at 4 degrees Celsius or lower.

I have listed down a few tips that might be helpful for you to maintain your duvet covers.

Pros And Cons Of Duvet Covers

As you are now aware of what is a duvet cover set without filler, let’s have a look at its pros and cons.

Duvet, duvet covers, and comforters are the most trendy pieces found in this category. So, can you put a comforter in a duvet cover? Or can you use a duvet cover by itself? All your queries related to both these terms will be answered over here.

While purchasing duvet covers, people often get confused about the different sizes of duvet covers. So, to make your shopping a lot easier, I have put forward some basic duvet cover measurements.

Note: All these sizes are mentioned by considering standard duvet size and bed measurements.

What’s The Difference Between Duvet Cover And Comforter?

The main difference between duvet cover and comforter is as follows.

Can A Duvet Cover Be Used As A Comforter?

No, a duvet cover cannot be used as a comforter. This is because the comforter is a thick, fluffy blanket and a duvet cover is a decorative, protective covering.

What Is A Duvet Cover And A Sham Set?

What Exactly Is A Duvet Cover?

A protective cover that is used to protect the duvet is known as a duvet cover. These covers are lighter and thinner than duvets and are easily washable.

What Is The Purpose Of A Duvet Cover?

A duvet cover has three main purposes: design, comfort, and convenience. This cover keeps the duvet insert cleaner for a longer period of time. It provides the duvet extra protection from body oils, sweat, and spills during use.

What Is A Duvet Cover Without Filler?

A duvet cover without a filler is a protective covering that comes without a duvet filler.

What Do You Put In A Duvet Cover?

In a duvet cover, you can put a thick cotton blanket as well as a comforter.

Can You Sleep With Just A Duvet Cover?

Since the duvet cover is two separate layers of fabric, it can be used alone as a light bed covering, taking the place of a summer blanket or quilt. Depending on the fabric, the duvet may not be as cozy as a traditional blanket as it was designed for protection, not necessarily warmth.

By understanding what is a duvet cover, you can easily add that luxurious feel to your bedroom without redecorating it. Duvet covers are a type of covering that can be used for protecting a duvet or comforter. These covers are very inexpensive and can be easily removed or washed. Cotton and silk duvet covers are one of the most commonly used duvet covers. Both of them are available in limitless patterns and textures. However, the other types of duvet covers do require special care and attention while cleaning. I hope all your questions related to what is a duvet cover are all answered in this guide.

To Know Some Great Stuff Do Visit AllForMens

To Know Some Great Stuff Do Visit Anamounto

To Know Some Great Stuff Do Visit AskCorran